R-E-S-P-E-C-T: What My Little Dog Isn't Getting


In preparation for our trip this fall, I'm brushing up on Nola's socialization as much as possible. Parks, crowds, and as many stores as we're able! On Saturday we went to TJ Maxx to look at luggage, and overall, it was fun! I called ahead, and the this store is small dog friendly (dog must be in the cart or in a carrier/bag). Since a big park of our trip will involve Nola needing to be in her sling carrier, this was the perfect opportunity to prep! 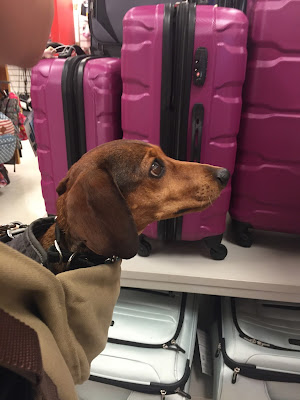 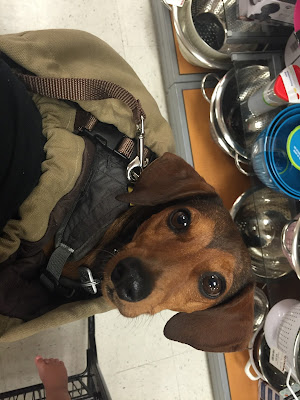 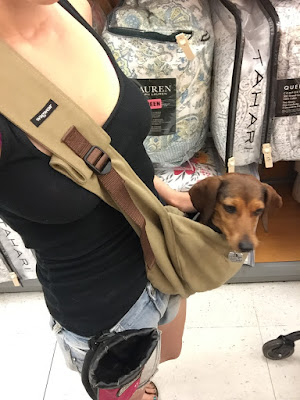 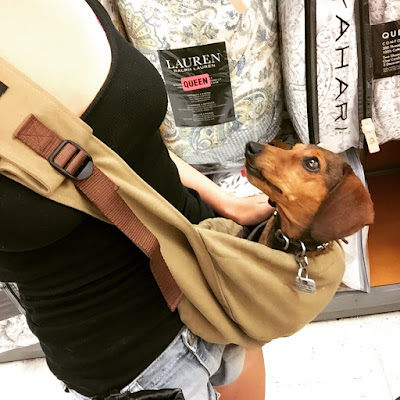 Nola did amazing, and took it in stride. It was crazy crowded, and she stayed calm and quiet. Lots of treats and praise were earned! Most people just smiled, and there was some cooing over the "oh my god, she's so cute!" dog. I admit to always loving that!

The one black spot on this was a pair of wild and unsupervised kids, maybe 8-10 years old or so. They'd been bobbing around their mother, bickering and plucking things off the shelf, and the mother did nothing more than glance at her misbehaving offspring.
As soon as I turned the corner, their eyes zeroed in on Nola. Cue squawks about "the puppy", and a headlong dash towards us with hands outstretched and reaching for Tiny Tornado. This was the only time Nola became uncomfortable, and I don't know whether it was because they surprised her, or they came rushing at me and gave me the "oh fuck" feeling, though I suspect the latter. She is very, very sensitive to changes in my moods and anxiety levels. She gave one short, low bark that I'm fairly certain only I heard (like I said, it was crowded!), and after a raised hand and a stern "no" from me, the kids quit and slunk back to their oblivious mother. To clarify, the raised hand and "no" were for the kids, not Nola!

Don't get me wrong, I like kids...well, some kids. Well behaved kids. Kids that I can give back once I've had my fill. Okay, so I really only like my youngest trio of siblings.
But seriously, come on! Control your kids. It's not that hard. If I can have control over an animal that is functioning at about the same level as a two year old human, then you can handle your prepubescent spawn. For god's sake, and people are somehow worried a quiet, 9.5lb dog being carried in a bag is somehow going to disrupt their shopping experience? That is so ass-backwards.

In addition to that, what person wants to run up and fondle a strange dog, especially without the owner's permission? Not to mention letting their kids do it! Nola likes kids, and there's almost no chance she'd bite (she's still an animal, so I refuse to say there's no chance), but still. The next dog someone rushes may not be so forgiving.

Nola is my first dog, but I grew up with Mastiffs. We never, ever had this problem with them. I see this lack of personal space and owner approval so much with small dogs, and it boggles my mind. You should pay the same amount of respect to a 10lb dog as you would to an 150lb dog. If a dog seems relatively calm and on leash, approach the owner and ask to pet the dog before. If the dog is being carried, I would prefer not to have my dog pet at all, especially not without asking. My dog is not a petting zoo, public propriety, or a learning opportunity for you or your kids.

Well...guess this turned into more of a rant than I anticipated! Tell me I'm not alone with this!