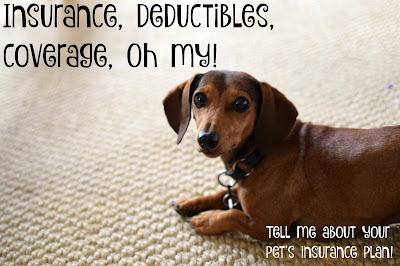 Recently I've started looking into pet insurance, and I'm a bit overwhelmed. So many choices! I'm hoping y'all can shed some light on the issue and share your experiences.

My dogs are all under 6, young and healthy with no existing conditions. I'd like to look into it now, while they are in perfect shape, than later when things may be different. I'd also rather have insurance and not need it, than need it and not have it.

Dachshunds are generally healthy, but their big issues tend to be very, very expensive. Back surgeries alone are enough to make you choke, and epilepsy and Cushing's disease are no walk in the park. I'd much, much rather have the option of coverage in the event of an emergency, rather than having to decline or alter care due to budget constraints.

I've heard people say they put X amount of money away per month into a dog only account, but that doesn't seem like it would work in my opinion. It would take a long time to build up a nice cushion, and once it was used, you'd have to start all over again. Plus, you never know when times may get really tight and you'd be forced to dip into the dog account. For me, I'd rather look into insurance.

Since some of these companies exclude conditions your breed may be predisposed to, I've been looking mostly at Trupanion and Healthy Paws. Both have no finical limit (per year, illness or pet), both let you choose your own deductible, and both cover alternative care such as hydrotherapy, acupuncture, physical therapy ect (Trupanion as a $5.16/mo add-on for Nola's stats). Trupanion includes behavior modification training in their add-on plan. Both can be used at any vet nation wide.
Neither cover routine care, and I'm okay with that.

I'm using Nola as an example for these:


What are your thoughts on pet insurance? Do you have or want it? If you have it, who do you use and how has your experience been?