Two questions from the last few days that aren't related to this post:

1. Nope, we didn't graffiti the smiley face on the rock from yesterday. I find spray paint cans too bulky for most purses. :p

2. Nola's coat is from Noodle and Friends, a Dachshund specific company, though their products do go quite large. Nola's is a wool coat (the Executive), and she wears an XXS. She's longer legged and shorter backed than most dachshunds, so it's a little long on her. Otherwise, I adore it! Super durable and very warm.

My sweet Roxanne had a vet recheck yesterday morning, and it was great news! The most improvement has happened this week. Everything has changed, from personality to skin to weight. It's incredible, and I can't even describe how rewarding.
This is a vet, behavioral/training, and just sort of a life update on Roxie, since she's been here 3 and a half weeks now! It's kinda long, so settle in.

She's been on low, slowly increasing doses of Ivermectin for a week now, and started the medicated baths every 24hrs on Monday (so she's had two). Other than that, she's no longer on any medication. All her infections and worms are gone, and all her sores/lacerations/ect are healed. She can move without breaking anything open!

Her skin looks and feels so, so much better! The crusty, scaly scabs and cuts are nearly gone, save for a patch on her shoulders and one on her rump just above her tail. Otherwise, it looks and feels like normal dog skin. Her smell has vastly improved, too! She smells like dog now, rather than death and decay.
WE HAVE FUR GROWING IN!!!!! Her tail, legs, face, and even sides have fur coming in. It's red, both clear and shaded. From what I can see, it's lighter than Nola but darker than Olivia's patches. I seem to collect redheads! 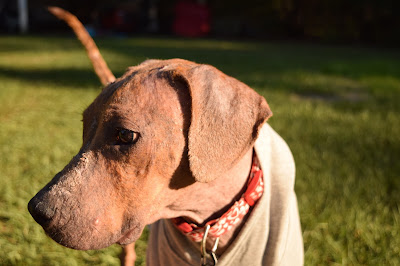 Last Friday I posted about the issues that were cropping up, and you all gave some truly wonderful advice. I've been reading like crazy, watching videos, ordering books, ect, and learning all I can about fearful and resource guarding dogs.
We've started counter conditioning to Nola being near Roxie while she's crated, and it's going quite well. Roxie's crate is in my bedroom, tucked under my bookshelves and right by the door, so every time Nola comes or goes, Roxie's showered with treats. I've also been having Nola hold a stay several feet away from the crate, and rewarding Roxie.
Nola can work at a distance, so I'll also have her moving through different cues (sits, down, spin, backup, core work, jumping on the bed. Really anything to get her moving) while rewarding Roxie, letting her associate Nola's activity with an amazing thing.
Another exercise is Nola recalling to me from a stay, then going into a drop on recall a few feet from the crate, so Roxie understands that Nola moving towards her = epic things falling from the sky. That seems to be both girls' favorite activity!

Re: on brining in a behaviorist
I would like to, but not only are their no positive trainers anywhere near me, I can't afford it right now. After reading and observing more, I don't feel we're in real need of one. No other issues have come up, and the ones here already are showing improvement.


It's going really, really well. Better than I expected, to be honest. Roxie's now up to wagging her tail with Nola near, with no stress signals and a calm, happy expression. There hasn't been an instance of growling or snapping, either. Oddly enough, the girls' relationship has improved since starting that! Roxie adores Nola, and is very respectful. She's so happy to see Nola (outside of the crate, but even crated she's starting to be okay). Nola is more tolerant, and they can happily share space. They seem to be growing to enjoy each other.

I'm still doing a lot of management with them, especially this early on, but I'm thrilled with our progress so far.

Aside from the CC-ing, Roxie's working on hand targeting, eye contact, overall handling/touching, and recall. Outside of the formal things, we're also sloooowly working on building positive association to noises, people coming towards her, and everything else that's making her uncomfortable. She's eager to please and has great food drive, and is handling it well!
This was her very first training session:

Roxie is still learning about toys, but has discovered a love of chews! Antlers, bully sticks, ect are a huge favorite.


She's acclimated to living in a home, and is now crate trained, house trained, and leash trained. She doesn't chew, either, though she can be mouthy. Working on that!

Her personality is coming out more and more. She loves people, loves to be touched and pet, and adores kids. She loves other dogs, too! She's very prey driven with chickens and cats, which we'll be working on but doesn't bother me. She's happy, gentle, and playful.She's already bonding to me, and I adore this dog.
I didn't get the dog I want, but I damn sure feel like I got what I needed.

Okay, vet update! Fantastic news all around. :D She's up to 35lbs now!!! That's a 12lb gain from the 23lbs she arrived at. That's incredible, and the difference it makes is staggering. The vet practice is thrilled with her progress! She's now up to a 2 on the body conditioning chart my vet uses, compared to the 1 she's been at every other visit. We're aiming for a 3, which is ideal and what Nola is scored at.


She had her first set of bordetella and distemper/parvo vaccines, and took them like a champ. She's had no reactions, not even a bump. She had another fecal done, and it was clear. Her skin looks amazing, and is healing at an incredible rate. She's gained weight, so her Ivermectin doses were adjusted. We have a recheck, another set of vaccines, and her first skin scraping in 3 weeks! I'll most likely bring her in each week to check her weight, and if we see a big jump the doses will be adjusted again.

I can't believe how much she's changed in less than a month. I nearly cried when I put the comparison photos together. I'm so thankful she's here, healthy and safe. 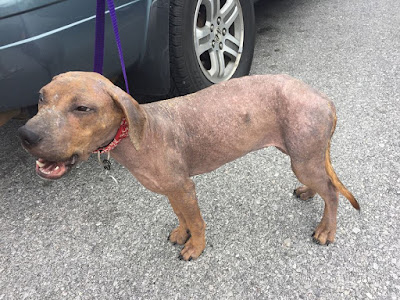 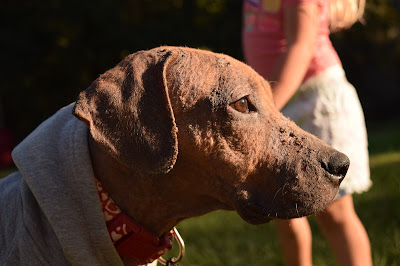 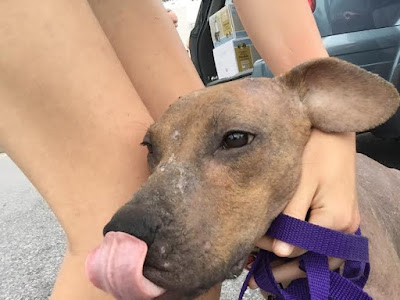 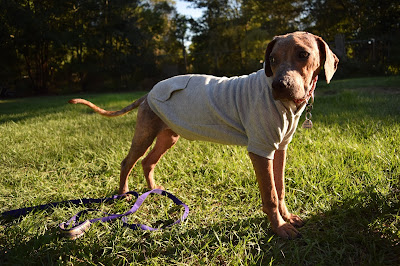 Who wants to take a stab at her mix? I'm thinking some kind of pit mix, but who knows? We'll eventually be doing a Wisdom Panel on her, just for shits and giggles. If you want to guess, go ahead!