No Words for This Kind of Horror 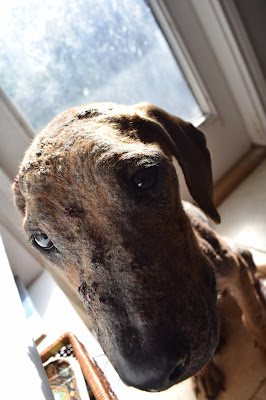 So Saturday afternoon while out for a drive, I spotted a dog on the side of the road. Very thin, but she moved too quickly for me to see much else. There were granola bars and some cashews in the car, so turned around and drove back to her, thinking of giving her the food. Pulled over, and nearly swallowed my tongue. Here comes this emaciated dog, literally every bone in her body poking out against her skin, covered in scabs, cuts and sores, and nearly completely hairless. I don't even know how she was alive. You'll see in a minute what I'm talking about.

Seeing this dog, a fucking puppy, in this state made red stain the edges of my vision, my stomach churn, and tears prick my eyes. Crouched on the side of the road, hand feeding this walking skeleton, tears running down my faces and how broken she was. I couldn't leave her. I just couldn't. I gathered her bloody body into my arms, put her in the car, and off we went.

Of course, this happened later in the afternoon on the weekend in a small town, so no vets were open. Called Banfield, called the e-vet, and both suggested taking her to animal control. The shelter in this town is tiny and overrun; they'd take one look at this puppy and have her put to sleep. Not on my watch. After getting some advice on how to keep her comfortable until vet offices opened on Monday, she came home.


She had an oatmeal bath to clean her and sooth her skin, ticks pulled off, ears cleaned, she had her nails trimmed as her dew claws were starting to grow back into her legs, and she had a Capstar to get rid of her ranging flea infestation.
She's been getting small, easy to digest meals every hour or two, along with very frequent small amounts of electrolyte water. She's being sprayed down with Vetericyn Wound Spray (if you have any kind of animal, that stuff is worth its weight in gold) four or five times a day, and is getting plenty of rest. She's peeing and pooping normally too, which is good. We'll be going into the vet's today.


I can't even put into words the horrible shape this girl is in. I'm almost certain she's suffering from severe mange (which variety, I'm not sure, so she's not allowed to interact with the dogs, is only being walked in the front yard where the dogs don't go, whatever she touches is being disinfected, she's confined to her crate when not eating, ect), in addition to being totally emaciated. There is no fat, and no muscle on this dog. She's literally skin stretched tight over bones. You can count her bones, even the ones in her face.
She has hair on her tail, patches on her legs, and a few pieces on the rest of her body, but is otherwise bald. Her skin is grey, scabbed and full of sores, sunburnt and rough. She has a lacerated ear, and a sizable puncture of some form in her rump. She was so weak on Saturday she could barely stand, but after food, water, and warmth, she was moving better yesterday afternoon, and was more alert and interested in saying hi and having pets.
She has worms, what smells like a double ear infection (Nola used to get them before her food allergy was figured out, and they have such a distinctive stench), and is more than likely anemic from the sheer amount of fleas and ticks she had on her. Her nails are overgrown, like I said, causing her feet to splay like crazy. Her eyes are discharge-y, too.

She's a young dog, if not a full out puppy. She has enormous paws, and a very puppy face. She has a good bit of adult teeth in, but they're still bright white and show no dullness of age. She's bigger than a beagle, smaller than a lab. Right now she's maybe 20-25lbs. What little fur she does have is the same color as Nola's. She's maybe 8 months, at most?

She is the sweetest dog. She's never once given so much as a calming signal throughout all of this, despite being in serious pain. She's gentle, very friendly, and seems to like kids. Curious and likes to be near people. To have gone through all of this and still be such a gentle soul is astounding.

I don't know how she ended up like this, but I'd put money on her being someone's pet at some point. She can walk on a leash, knows what a food bowl looks like and a treat bag sounds like, has no issues with a crate, isn't phased by sounds of a home (vacuum, TV, ect). She's heartbreaking to watch.


As of right now, she's being called Lucky Puppy (original, I know). My main concern is getting her healthy, and go from there. She could very well wind up staying here, provided she doesn't show any dog issues once she's better.

Warning: While I didn't take any up close photos of her more nasty problem areas, it hurts to look at her. These pictures are upsetting, and just plain stomach turning. 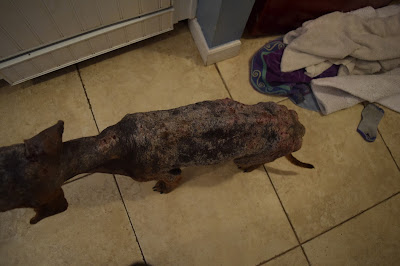 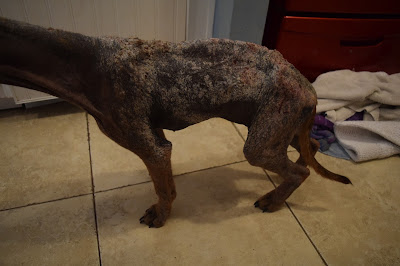 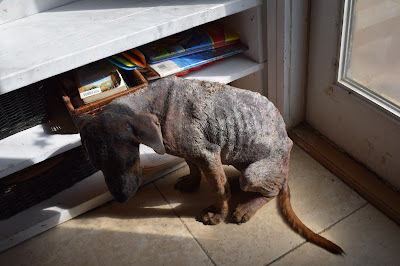 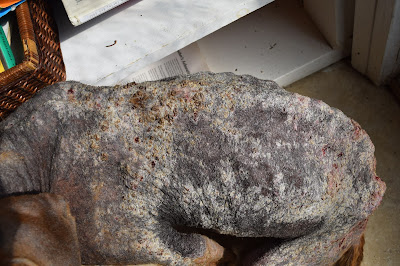 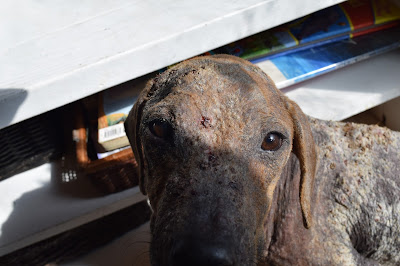 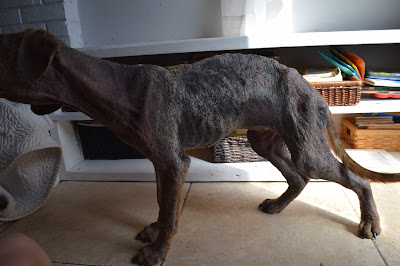 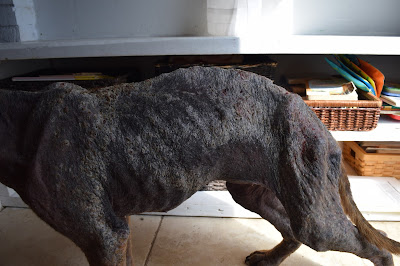 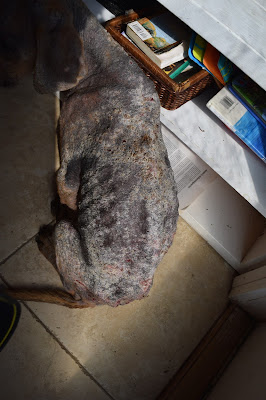 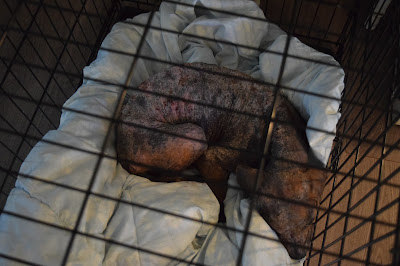 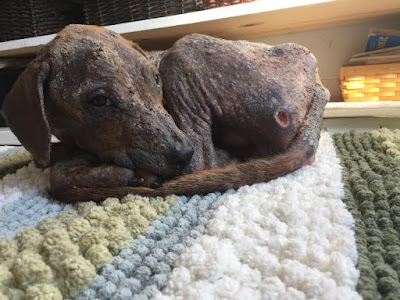 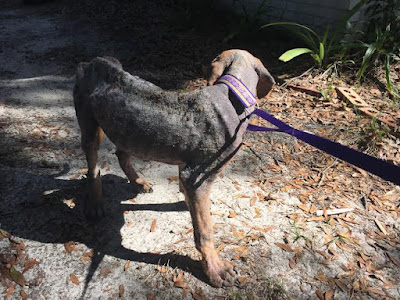 I plan and budget precisely for my dogs, but this came right out of left field. While I'm assuming full responsibility for all her care, I'm not independently wealthy. I've swallowed my pride, and set up a GoFund me account you can find here. If you'd like to help with Lucky's vet bills, it'd be greatly appreciated. If you can't, or don't want to, that's okay, too. No pressure either way. She's getting help, no matter what.

We're off to the vet's, and I'll update on what they said tomorrow. If you follow us on Facebook or Instagram, I'll probably post a quick update there once we're done. Wish her luck!