Birds of A Feather 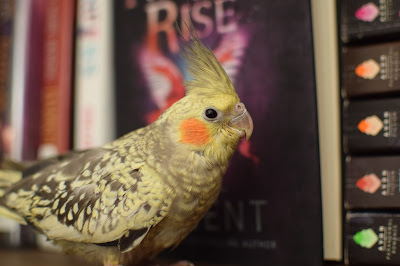 This is our newest addition, Finn/Archer/Oliver (feel free to share which of those you like best!)! He's a baby pearl cockatiel, just weaned from hand feeding. He's from a semi-local aviary (and holy fuck, I thought dog people were nuts. They have nothing on bird people), and is a really sweet baby.
He loves cheerios, climbing, and sitting on your shoulder. He'll step right up onto your finger, foot, or anything else he can grab, and he LOVES anything shiny. Necklaces and earrings especially! He's a bit temperamental at times, though, and tends to sulk if he doesn't get his way. He fits right in. ;)

I say "he", but I'm not certain what sex he is yet. They can't be visually sexed with any reliability until after the first molt at around 6 months of age. If he's a male, he'll lose the pearl striped pattern and just be grey; if he's actually a she, she'll retain it. If I had to guess, I think he's a boy. He's quite vocal, among other things!

Nola has met him through the cage bars, and while she's definitely interested she listened to her "leave it". He doesn't seem to mind her too much, and of course they're never allowed to interact without a barrier. I don't trust the other dogs enough to be that close to him, so his cage is put up out of their reach.


This is my second pet bird, and also my second cockatiel. My first 'Tiel, a rescue with a deformed foot, passed away about three years ago now.  I missed having one. It's surprisingly how something so small can be so enjoyed! They're delightful little birds, and full of personality.
Cockatiels aren't obnoxiously vocal like many other types of birds, but they can whistle and even learn to talk. My old Tiel, Blue, would wolf whistle, mimic the sounds of hens clucking, and even torment the dogs by using the sharp whistle they're trained to come to. They're very smart, and one of the cuddliest and most loving birds. So much character in such a little body! 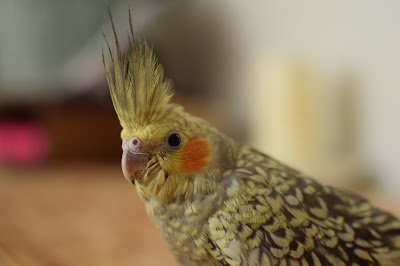 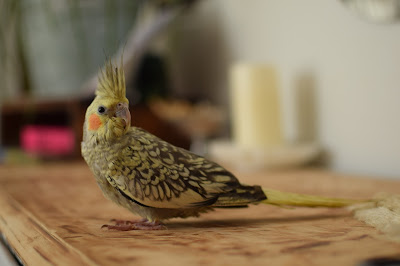 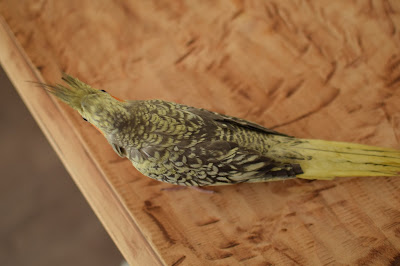