Hi, everyone! Today I have a review of the redesigned PupSaver, a safety seat/car seat for dogs up to 30lbs. The PupSaver protects and cushions your dog in the event of a sudden stop or impact and also keeps your dog contained so you can focus on the road. In fact, it is the only dog car seat on the market that has passed basic child seat safety testing at multiple weights (up to 30lbs) at a National Highway Traffic Safety contracted facility. You can't get much safer than the PupSaver! Here's the details on it:


PupSaver is the only patented small dog safety car seat to pass a series of 30mph frontal crash tests at MGA, a National Highway Traffic Safety Administration (NHTSA) contracted research lab. The CENTER FOR PET SAFETY (CPS), a registered 50 (c) (3) non-profit research and advocacy organization, designed this test to mirror the FMVSS 213. This is the same crash test used to measure the effectiveness of child safety products.
The PupSaver contained a 25-pound occupant at 30 miles per hour.

And here's a little about the company:

When my Dad, Ray Bennett, inventor of the PupSaver, was riding down the road (on his way back from *daily lunch) with Webber the Lhasa Apso, he had to slam on brakes to avoid being in an accident. Ray knew that Webber, who was not injured badly, but shaken and sore for days, had experienced a close call. He could have broken a bone, put out an eye, had internal damage, or worse. This. Changed. Everything! Ray would not allow Webber to ride shotgun (and he’s no back seat pup) any longer with out a stack of pillows guarding him from the dashboard. My Mom, Judy, was not a fan of disassembling a pillow fort every time she got in the car, said “You need to invent a car seat for Webber” (it’s like they say, “behind every good man….”). The rest is history.

Why Did We Invent The PupSaver?

The real inspiration, beyond Webber’s “angel face” (as Ray puts it), was the lack of legitimate car safety seats - for small dogs, especially. Harnesses can do more harm than good and booster seats simply give your dog a view that makes them happy, but puts them at greater risk than sitting on the seat. We set out to create the first-ever impact protection device: something that would decrease the likelihood of injury or fatality for small dogs when faced with an accident or short stop in a vehicle.

It's clear thatPupSaver was created as a very personal project for my Dad, who was secretly suffering from serious empty-nest syndrome when he invented the  PupSaver!! He loves my little ”brothers”, Webbber and Gizmo, just as much as he loves my sister and I (no joke!) and would do anything to keep them safe at all  times. Always a HUGE seatbelt advocate (coming from the auto industry), he was the most likely candidate to invent a Doggie Car Seat. Impact protection is  what  truly sets the PupSaver apart from other dog car seats and it is what keeps small dogs from being hurt, or even killed, in accidents or short stops.

The Goal of Our Company:

To change the way that people look at dog car seats. In the seventies, people put their babies in bassinets to bring them home from the hospital. If you tried to leave a hospital now without your baby in a car seat, you’d have major problems. Back in the eighties, people still put babies in booster seats. Why? So they could see out the window! Horrific accidents taught us valuable lessons in car seat safety. Technology advanced and better car seats were designed. Our “furbabies” can now benefit from the same impact protection that their humans do and PupSaver holds the patent on that design. Let’s save some pups!!


The PupSaver now comes in three different colors, all with the same design and top of the line safety features:

The PupSaver is easy to install (once you get the hang of it! And learn from Mom's mistake: watch the video on how to install it before you blindly fumble with it and say cuss like a sailor), easy to remove, can be used in the front or backseat, is lightweight and portable and quite cozy for your dog. In fact, it can be used as a bed when you travel!
It has five buckles to attach to your car's seatbelt; three on the bottom and two at the top. The carrying handles at both ends are reflective, and there's a tether in the middle that's the prefect length. DM: While using the PupSaver eliminates the need for a complicated and bulky car harness (many of which are not safe, FYI: go here for the Center for Pet Safety's 2013 car harness testing results), I personally wouldn't attach the tether to a collar. The idea of something attached to my dog's neck in the case of an accident breaks me out in hives, so Nola is clipped to her harness while in it.

Here's a video of how to install it: 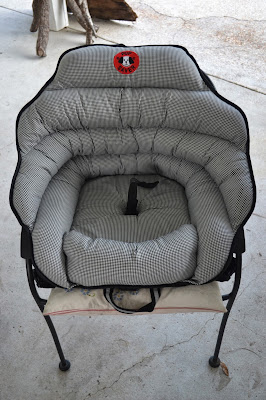 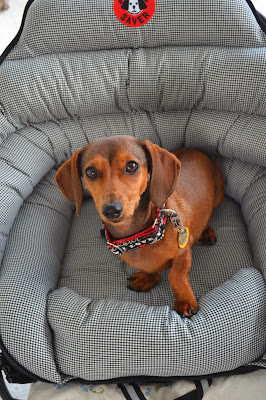 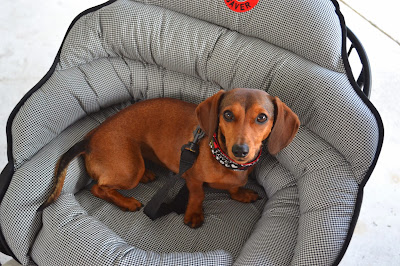 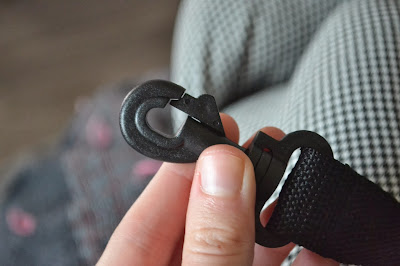 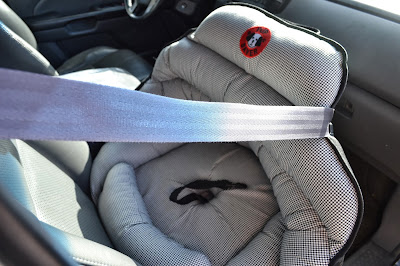 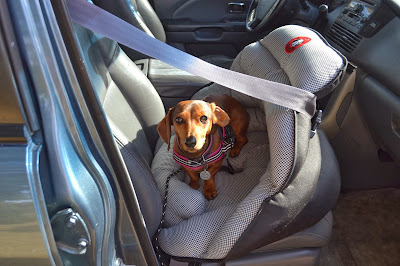 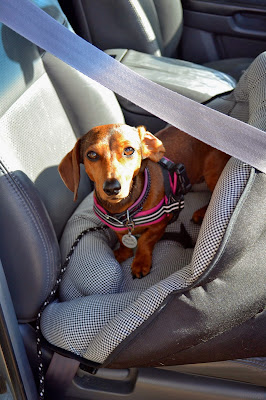 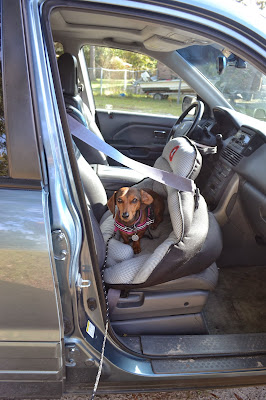 
CONS:
I'd like the tether snap to be metal instead of plastic