Layla is now four months old (actually four months old and not just 16 weeks...I hate how that doesn't match up!) and I'm probably jinxing myself horrible right now, but she is such an easy puppy. 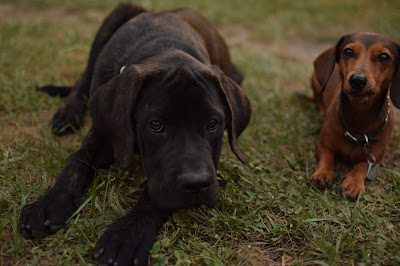 She hasn't had an accident since 10 weeks old, and even though she's teething now it hasn't been too bad. She's lost most of her top incisors and a couple of her bottom ones. Every time I have a puppy I forget how absolutely vile teething breath is. There's nothing quite like that smell!
She likes to pick up anything and see if she can get away with chewing it, but she is very good about brining it to me and giving it back when asked.

She's 45lbs and...I don't know how tall because I can't find my tape measure. :p She's still growing slow and steady, not monstrously big and painfully oversized, and no pano or other growing pains. For the past week and a half she was on a different food with calcium and phosphorous levels on the very high end of acceptable, and she did start having the faintest bit of knuckling over. She's now back on the lower cal/phos and is back to normal.

She knows sit, down, come, not yours (when she picks things up she shouldn't have), be easy (on the cat and for food), crate, outside, leave it, and we're now at the point where she sits before I open the door or the gate, and sits for attention. That last one started because she thought jumping up would be fun last week, and that was nipped in the bud. Now she'll run at you full tilt and spring up about 5 feet before she'll slam into a sit at your feet. It's adorably clumsy.
She isn't the brightest bulb, but she tries so hard and gets so freaking proud of herself when she does it. The other day I asked her and Nola for a down. Nola immediately dropped down and stared up at me expectantly with a look of utter seriousness. Layla cocked her head at me with her tail wagging furiously, and I could just see the wheels in her head spinning. After about 5 seconds, the light came on and she flopped down with the biggest, most self satisfied smile on her face. 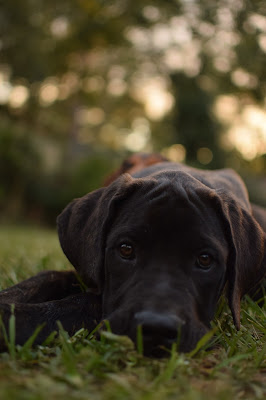 She and Nola get along quite well, even though Nola gets irritated with her antics on occasion. Pike refuses to acknowledge her.
As good as a puppy as she is, she really makes me appreciate how good Nola is. ;)

That's pretty much it!