This Roxie update isn't a very happy one. Don't worry - she's fine! She's doing great, actually. Her coat is really coming in, and she's holding steady in her weight. She's a sweet and happy girl.


Some may have seen this on Facebook already, so just skip down to the line if so. This is just a recap.

Ever since Roxie has started to get better and her personality has started to blossom (so, about week 3-4 of having her?), she's shown serious interest in certain small dogs. She fixates, she strains at the leash, and her focus is difficult to break once she's locked in on one. Two things strike me as odd about this though:
1. She does not do this at all with the other small dogs she's met. I don't think age, size or color plays a role, but personality might. The dogs she reacts to are all on the timid, "submissive" (calm down, I'm using the dictionary definition of it because that is exactly how they act) and flighty. The dogs she does not react this way to are confident, fearless and a bit bossy.
2. She does not act that way towards those dogs all the time. There doesn't seem to be a rhyme or reason as to when she reacts.

Since getting her, she's met a good few dogs in depth. My dogs, my parents', and each of my three sisters' dogs. These dogs are my dachshunds, Pike (tiny mini Aussie), my parents' dachshunds and Mastiff puppy, my sister's Black Mouth Cur mix, and my other two sisters' dachshunds. Of those dogs, she'd shown the major interest in Olivia and my youngest sister's dachshund. As such, she's not around the one dog, and Olivia is crated or Roxie leashed when they're around each other.


She'd never shown anything like that to Pike or Nola, so I wasn't really thinking the other day when this incident happened. 100% my fault for that lapse in judgement, but that factors in later in this post.
Anyway, it was evening time and time for Roxie's off leash yard time. Nola was loose in the house, Olivia was crated, and Pike was on the other side of the yard waiting for my neighbor to come home (the boy is so obsessed with his routine, and I knew he wouldn't move until they got back). I had Roxie playing, and then the neighbor came. Pike did his usual "omg person is near the yard, PERSON IS NEAR THE YARD!!!!" routine, and when the neighbor went inside, Pike was done and went running to the backdoor.
Roxie saw him and it was like a flipped switched. She completely honed in on him, and took off like a shot after him. The focus and intensity she had on him was terrifying, and she wouldn't respond to my voice. Pike was screaming as she chased after him; the dude is insanely fast, and she couldn't catch him until she got him to the house. She got him pinned up against the side of the house, and then I yelled harshly enough to get her away from him and then move her off him. This took maybe 10-15 seconds, and my yard is big. Pike is completely fine, and she didn't touch him before I got to them, but he was terrified.

She was not chasing him in play. She chased him in the same way a dog will before they kill a chicken, squirrel, or other small animal. That, combined with her behavior towards Olivia and her pit bull breed mix, has me beyond concerned.

I don't know what to do. She's an amazing house dog, and is fantastic with people of all ages. She's great with the two larger dogs she's been around, and plays well with them both. She does not display the typical signs of aggression, like snarling, snapping, ect.

However....the thing with Pike, and how she is with those few smaller dogs.... it scares me shitless. To top it off, she has a large chunk of pit bull type dog in her mix, if she's not pure. Pit bulls are not bad dogs in any way, but you can't ignore their insanely high chance for dog aggression and prey drive. You also can't ignore the fact that my dogs are between 8 and 12lbs. Roxie is 40lbs of ridiculously strong muscle.

Since the Pike incident happened, I've been talking extensively with the bull breed owners I know of Facebook, and reading as much as I can. There doesn't seem to be a cap on when you're in the clear with dog aggression, nothing that says "we'll, she's 18 months and has no problems. You're good!". If anything it seems to get worse with age. I'm leaning towards extremely high prey drive vs. actual dog aggression, but there's always the fear of DA in my head, now more than ever.

There is always training and there's always management, but I do not believe you can totally override nature with nurture. There is always going to be that thread of doubt, the seed of worry that something will go wrong, and now there's a bit of history to back that fear up. I feel like I'm playing Russian Roulette now, always wondering if things will be fine or if something bad will happen instead. While I've been insanely careful since then, there's always the possibility of mistakes. I'm worried that if one would happen, things would be much worse than just Pike getting scared. Even if she did back off if she went further than she did in the hypothetical next time, it'd be so easy to seriously injure of kill my dogs.

To be perfectly honest, I never would have planned on keeping her if I knew she was a pit bull. I would have still helped her, without question, but I would never have even entertained the idea of her staying her. I have dogs, and it'd reckless and a bit idiotic of me to intentionally bring in a super high prey drive or dog aggressive breed. So many dog breeds are off my "want" list for those reasons alone. My dogs play some of the biggest role in any new dog's life, and their safety is paramount to me, and I need to be able to trust my dogs. I trust the small dogs implicitly with people and each other. I do not trust Roxie with other dogs.

I'm also having trouble stepping back enough to accurately access the situation. Right now I feel too tangled in "oh my god, my baby!" reactions to bluntly see what it is, or is not.

I haven't made a decision on what to do yet. My head is still spinning with information, people's opinions, my own fears (both legitimate and the ones I've probably blown out of proportion), different outcomes and different options. I've cried more times these past few days than I can count. I'm confused, hurt, worried, and beyond upset. I can't express how painful it is to pour so much energy, emotion, time, and money into a dog and have something like this slap you in the face.

These are the options I see right now. One and two are similar. Note: a professional is not an option. There aren't any here that use methods that won't make the issues worse.

1. Train as much as possible to have her learn to ignore the other dogs, and manage accordingly. This would mean never allowing them loose in the yard together, never loose in the house without watching them like a hawk, doing a less extreme version of crating and rotating, ect. This option includes minimal risk towards the small dogs, but there's still a chance of something going wrong.

2. The above, with stricter management. Never in the yard together unless Roxie were muzzled, never loose in the house together, strict crating and rotating schedule (which would have Roxie crated more than the small dogs, as they're safe to be out together), ect. This eliminates the risk to the small dogs (barring a possible slip, which is sadly always a possibility), but keep Roxie isolated for most of the time.

3. Rehome her to a home where she would be the only dog, or with one larger dog as a playmate.


I'll go through thinking of all the bad things that could happen, and then I see her being fine with Nola in the house, and remember how she's been 100% fine with Nola in the yard. Fine with larger dogs, fine with other small dogs. I'm torn. I don't want to make a rash decision I'll regret, but at the same time, I don't want to let emotion cloud my judgement. My checklist of sorts for each of the options is: 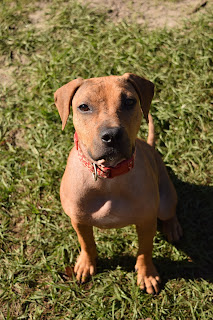 If anyone has any ideas, or can just offer an unbiased opinion on options, please share. If you have something nasty to say, please just keep it to yourself. Trust me, I've got enough guilt over this all on my own. I've given this dog my all, and I'm at a loss as to what to do. Some things to keep in mind: 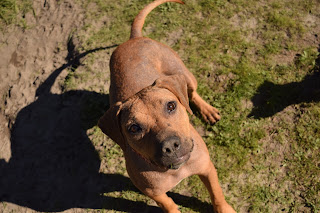