Roxanne has been here four and a half weeks now! We're having another (thankfully much, much smaller) medical problem, so that's really all this post is about.

This entire process have been beyond exhausting and stressful, not to mention frustrating. It feels like something is always going wrong, or I'm constantly waiting for the other shoe to drop. She was sick, then much sicker, then she got better and better, and now we're having problems again. I just want smooth sailing! Good god, I think we've both earned it.


Roxie's been acting off since Tuesday. She's been having diarrhea, slight decrease in appetite, is a bit cranky and just overall really listless.  She's limping on her left front leg, the same one that had the swelling/limping/stiffness issues during her first week here.

She had some of The Honest Kitchen food for breakfast on Tuesday, and I'd initially written the diarrhea off as a new food. However, it hasn't lessened, despite her only getting her regular kibble again. She's drinking fine and staying hydrated, and it's not like "oh my god, she is pooping everywhere all the time". There's no increase in her pooping, just the consistency of it. (Gotta love the dog world for poop talk, right?)
She's still eating her normal amount and eating treats, just not with her usual gluttony.

She's backslid some on her crate guarding since she started having the problems. The lunging has not resurfaced, thank god, but the growling is back.

She's normally happy to follow me around the house and be where I am, trot around the yard, or lay by Nola in the evenings while I blog. Right now she only wants to be in her crate, and is sleeping more than normal.

She's on medicated baths every 48hrs, and is on Ivermectin, both for treating the mange. I didn't give her the bath or the Ivermectin yesterday in light of the problems cropping up. Perhaps it's some kind of sensitivity to it? It'd be odd if so, since she's been on it for nearly two weeks now. She did appear a bit more perky last night though, when she hadn't been dosed.

On the positive side: She's still eating and drinking, still sweet, eyes still bright, is still happy, and is growing in a lot of hair. I hope this is just a minor setback.

We have a 9am appointment with the vet today, so we'll see what's going on. Tried to get her in yesterday, but they didn't have any openings, and I don't trust another practice to work her case as well as our vets do. Send us some positive thoughts! 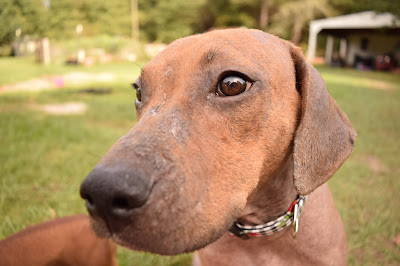