Little Wonder Pup has been here two weeks as of Saturday. She's improved by leaps and bounds! We have a recheck at the vet on Wednesday, and hopefully she'll be well enough/have gained enough weight to start the treatment for her mange.


She has a name: Siren! Well...she has two names. Lucky's kind of sticking to her, so she's usually called Lucky Siren. I hope Lucky drops off soon, and she can just be Siren.... we'll see! 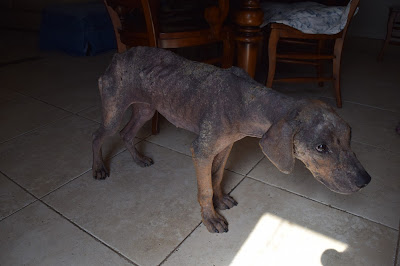 She's gained some weight, which is great. She's finally able to eat a normal amount of food each meal, rather than as much as 10lb Nola gets. She's up to around 1 cup per meal, and that's usually 4-5x a day. I want to say an enormous thank you to Blueberry and her Human  for sending Siren/Lucky food from her Amazon Wish List. She'd finished what I'd bought for her the day your bag arrived (big dogs eat a lot. Like, a lot.). Thank you so much!


She's finished with her antibiotics, and we've kicked the conjunctivitis and worms. Her scabs are mostly healing, and the enormous sore on her hip is nearly gone. The laceration on her ear is almost totally healed, too. She's your typical clumsy puppy, and has a section of scabbing on her face she keeps splitting open. :/ Other than that though, she's doing well! Her knuckling over is gone, as is any of the twitching from the vestibular disease. So happy!


Her personality is starting to come through. She loves people, loves affection. She's quite cuddly, and very sweet. She's a bit tentative with... well, life, but we'll get better. She's only had one accident in her crate since she got over her vestibular issues, and none when she's out of it. She doesn't chew (yet, at least), and is very respectful of the other dogs.
She loves food, of course. Isn't sure what to do with toys, and that makes me sad. However, she's discovered the joys of a Kong!


Nola is tolerating her better than I thought she would. She's a bit snarky when Siren invades her space, or mine. That's working itself out, though. Otherwise, they're out and about in the house together (supervised, of course!) without issue. 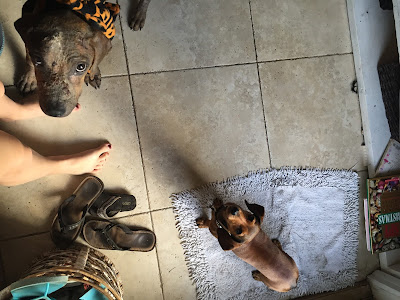 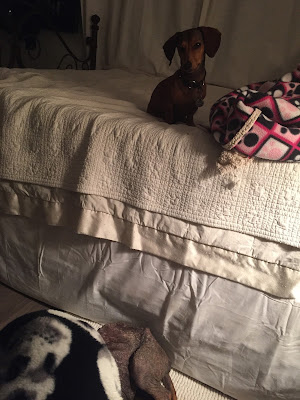 I've taken comparison photos from her Day 1 and Day 14 here. Most changes you have to have had your hands and eyes on her to see, but I hope y'all see improvements, too! 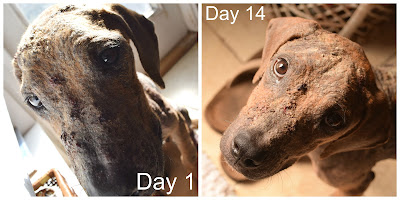 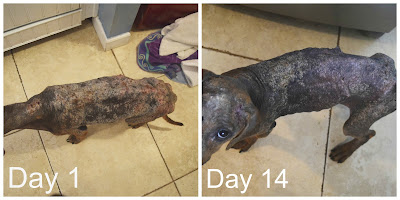 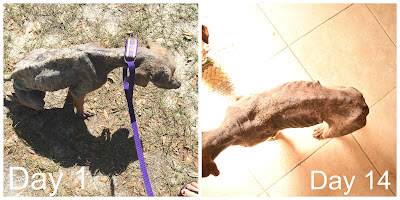