Our Biggest Adventure Yet: Planning Stages

I'm so happy to announce that next year, Nola and I will be traveling to Europe (backpacking- at least to some degree - more than likely)! This has been a dream of mine for years, and I'm finally at a point that it's nearly possible.

I hope to be able to save enough by the spring of 2016, and if not it'd be that fall. I haven't quite decided yet how long we'll be over there, but it will mostly like be around 4-6 weeks. We'll mostly be traversing Italy, though I want to see so much more. Rome, Venice, and Florence will be must sees, and I want to visit the Amalfi Coast as one of my all time favorite books is set there. Aside from that...who knows? 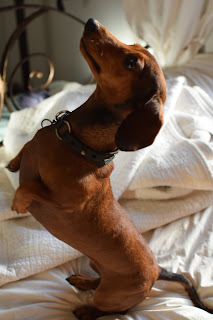 My parents will be keeping the others dogs and Finn (the bird) while we're away.
Some people can't fathom the idea of taking their dog with them, but it really doesn't bother me. Despite the extra steps and slight limits that come along with brining Nola, nothing makes me happier than sharing this dream with the dog of my heart. Plus, just imagine the blogging and photo ops! ;) I've been carefully researching and stalking following a few other bloggers who've taken their dogs internationally with them, so I'll be well prepared.


Right now I'm just in the save-every-single-penny-that-isn't-absolutely-vital stage, and researching the crap out of everything. Lots of number crunching and careful budgeting. As someone that's never been gifted in math, it's a headache. It's still worth it, though!


I'll most likely be doing progress updates every month (if I remember) for the remainder of the year, and then more frequently as it gets closer to that time. I'm excited to share this journey with you all!

Have you ever been abroad? Tell me your adventures!